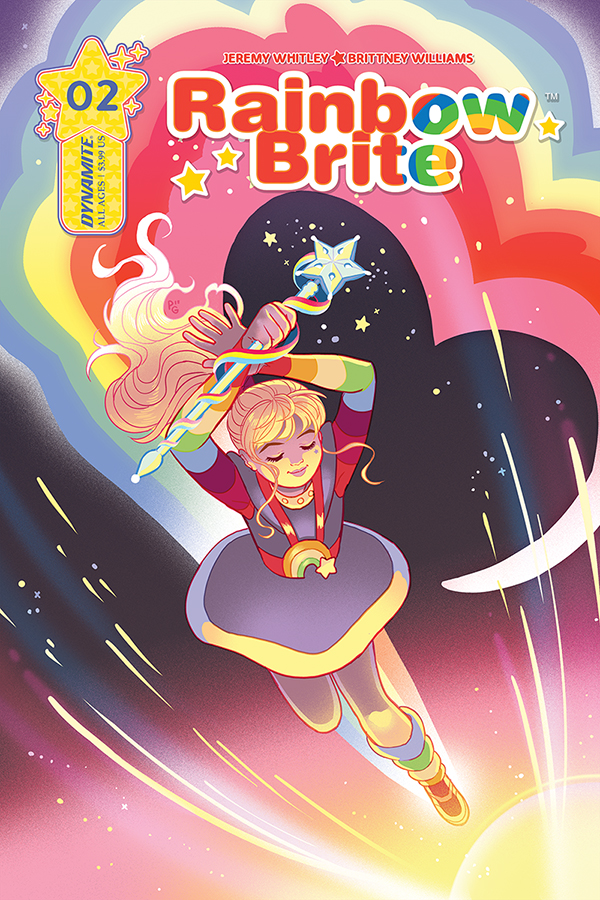 Intro
This issue continues the all-ages comic book reboot of Rainbow Brite. The previous issue introduced Wisp (soon to become Rainbow Brite herself), Twinkle (a Sprite sidekick nicknamed “Twink”), and the main conflict of the story. The conflict revolves around monsters coming to “our” world to steal colors. Wisp and Twinkle made it to Rainbow Land, which was revealed to now be completely in black and white.

The Story
This story continues right in the middle of the action, with both Wisp and Twink being chased by a color hungry Shadow Hound. Twink explains that these hounds have been twisted by the Shadow King, and Rainbow Land in general now lacks the color it once had. While the Shadow King himself does not show up in this issue, his henchmen make up the antagonistic force. Murky Dismal is an evil scientist that steals color to fuel his machines, and his monster sidekick Lurky makes an appearance as well. The main focus of the story is Wisp trying to break into Murky’s lair in order to find the Star Sceptre and the Rainbow Belt.

Tim’s Thoughts (special co-reviewer Tim Jr.)
While this issue was fun, I could not appropriately review this comic without the help of an expert, my nearly 4-year-old son. We read the first issue together and he fell in love with it. He is used to reading trades with me, so the wait between issues was long for him. He was excited for issue two and has even asked to read it twice since I received the review copy.

Jeremy Whitley has created a really fun story and built up an interesting world. My son was fascinated by the idea of monsters eating color. The humor and writing in this book were easily understood, without ever talking down to the audience. This is a feat that all great children’s books need to achieve. The chase scene at the start of the book hooked my son immediately. It was that right amount of scary, not nightmare-inducing but exciting enough. He loved the “punchline” when Murky finally meets Wisp and it made him laugh. That scene, in particular, did a great job at empowering the lead character, and the intended audience. The only thing Tim Jr. wasn’t as engaged with was the lengthy exposition of the world-building in the middle of the issue. The action does slow as Twink fills in the backstory of Rainbow Land, and he did start to lose some interest. The information dump is quite large and daunting, it wasn’t done in the most eloquent way. However, the ideas and concepts that make up this Rainbow Brite universe are, without a doubt, very interesting. Again, this issue leads on another cliffhanger that immediately had my son asking for issue three. I have to admit, Rainbow Brite is now a highlight of our bedtime reading schedule.

Brittney Williams’ art is incredible. It gives the whole issue a very children’s cartoon vibe, which has to be the intention here. My son loved the designs of everything. Murky, Lurky, Twink, Wisp, and the Shadow Hound stood out on the page, thanks to the coloring Valentina Pinto. The coloring does make an impression in this issue, as Rainbow Land is in greyscale and all characters are full color. While this is thematically important, it also helps younger readers follow the story more clearly. The cartooning done in this series is exactly what a young reader would enjoy.

Summary What we have here is a really fun comic that kids will love, and adults can enjoy reading to them. The characters and universe appeal to younger sensibilities without it being shallow. Overall, a great all-ages book that does not lean on the nostalgia of the original material.

Fuming in the Silence Zone (The Silencer #3 Comic Review)

Where Do I Fit In? (Go Go Power Rangers #6 Comic Review)