There is nothing (Doomsday Clock #9 Comic Review) 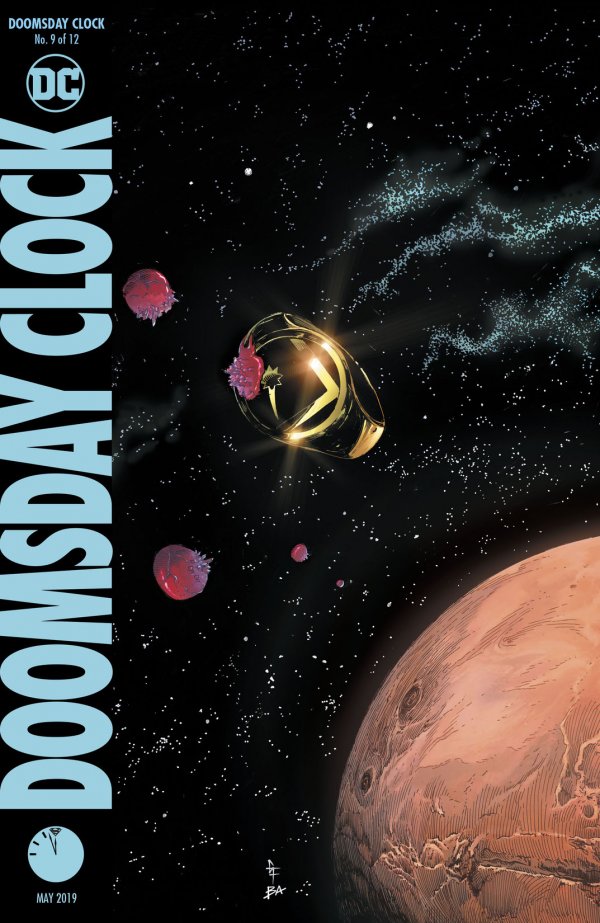 The wait between issues has been long. When Doomsday Clock last left off Firestorm had seemed to kill multiple people in Russia in a nuclear like blast, accompanied by Superman. This issue deals with the fallout of those events and bring Dr. Manhattan back into the fray. The last instance of seeing Manhattan he realized that, even though he can see all of time and space, his foresight ends during a battle with Superman that has yet to occur. The main thesis of the title is the meta commentary that the shadow of Watchmen looms large over the comic book industry, and DC in particular. While Watchmen is a rightfully celebrated masterpiece, the grim, gritty, and realistic nature of the title was shoehorned into other books. You can directly trace the success of Watchmen (and Dark Knight Returns) to the darkening of titles in the 80s and 90s. This shows itself on the comic page by alluding to that Dr. Manhattan himself is responsible for removing some of the more fun and outlandish elements of the DC universe since the last reboot (The Justice Society of America and The Legion of Superheroes being the primary focus of his target in this title).

Story
Many things happen in this issue, and it seems that the conflict is building to a fever pitch. Everyone now knows that Dr. Manhattan is behind the explosion in moscow, even if they are unsure who he is. Many superheroes actually face him, and they get a good look at his power level and how unstoppable he is. Furthermore, some of the larger mysteries in the book are answered; who sent Lois Lane proof of the Justice Society and if the Superman Theory is real.

Tim’s Thoughts
Doomsday Clock started off incredibly strong but has been running out of steam in the public zeitgeist. This is unfortunate, because unlike any other big “event” comic coming from DC (or Marvel) this one has been packed with intriguing concepts, great writing, and interesting character development. The only thing slowing down Geoff Johns’ writing is the schedule itself. This title only seems “slow” because the issues are coming out at a snail’s pace. This comic is a great example. We get an exciting and interesting battle between the heroes and Dr. Manhattan, that Johns paces perfectly. Clearly, something most readers would be excited to see. Also, Dr. Manhattan plays with time as his understanding and foresight has been damaged. Since he can exist outside time and space there are moments in the issue he is answering people pages ahead of their questions. It is a great touch to the comic and emulates moments in Alan Moore’s Watchmen faithfully. Geoff Johns has also been able to introduce and create new elements to the plot and overall mystery of the series and is unafraid to tie off some loose ends here. No thread overstays its welcome and every answer leads to more intriguing questions. Lex Luthor’s role, for example, gains importance in this issue and I can’t wait to see how he fits into the larger narrative going forward. Again, if this comic was coming out monthly it would be one of the most talked about series. Hopefully the writing finds new life and strength when it is collected.

I am going to sound like a broken record talking about Gary Frank. He is simply an incredible artist that work so well with Geoff Johns’ style. The both elevate each other to heights beyond their work elsewhere. It is impossible to fill in Dave Gibbons enormous shoes from his Watchmen work, but Frank is able to fit perfectly into that universe while also carving out his own unique take. I really can’t see any other artist moving forward with these characters and concepts. Gary Frank’s work is clearly why there is a wait between issues, but in the end it will be worth it.