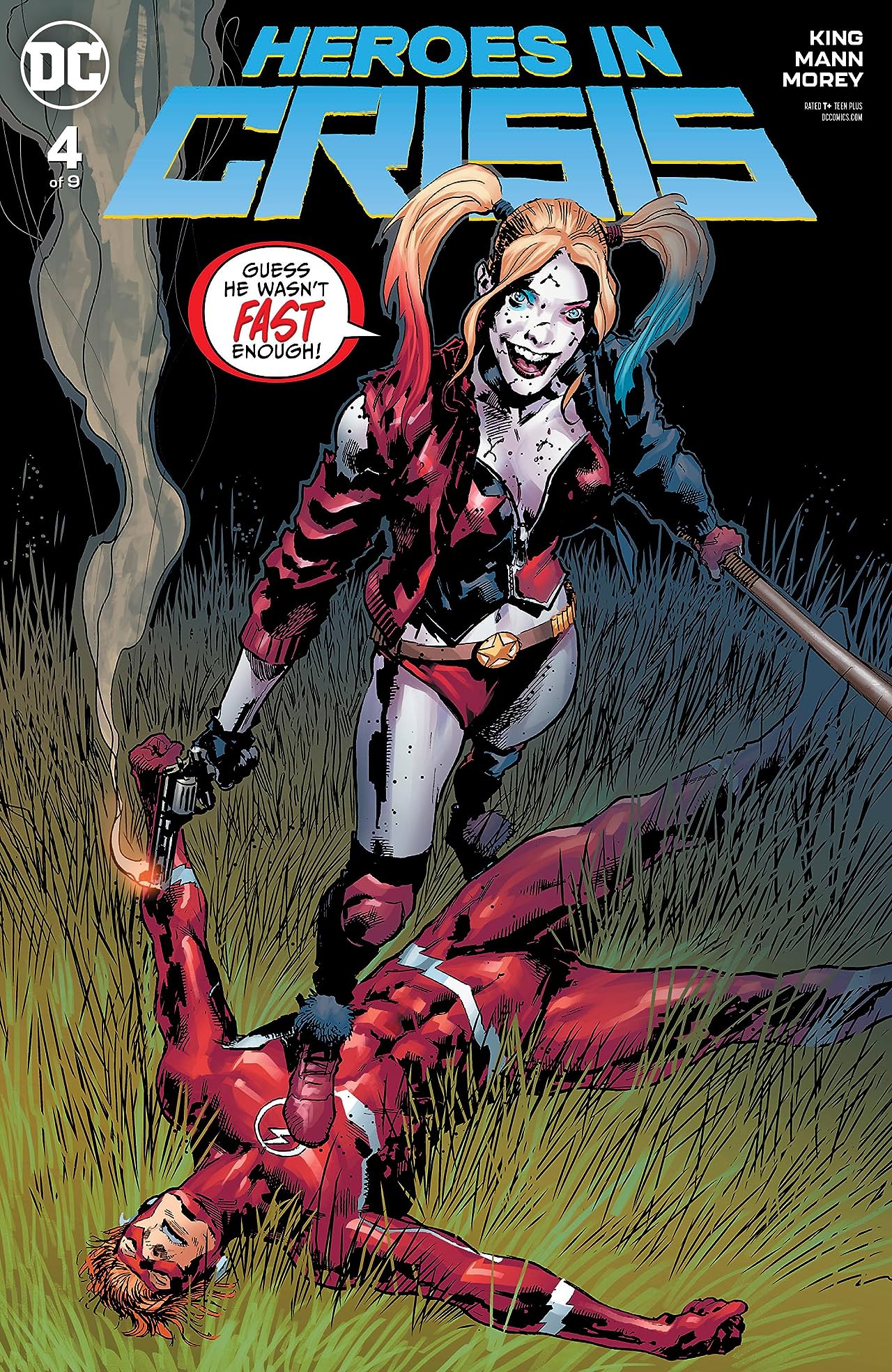 Intro
The previous three issues have been building a larger “crisis” for the greater DC Universe to face. There is the mysterious “Puddler” who seems to be the force behind the massacre at Sanctuary and has access to all the video files that reveals the heroes identities and deepest secrets. Both Booster Gold and Harley Quinn seem to have been actively engaged in the murder of their allies, but neither claim responsibility. It is clear there is something larger at play and the reader has only a small percentage of the full story.

The Story
This issue focuses more on interpersonal relationships than the larger plot. Very little moves forward, and the few threads that do move in a predictable manner. Batgirl confronts Harley Quinn, Booster Gold teams up with his old friend Blue Beetle, and the Trinity continue their detective work. There is not much else to the story than that this time.

Tim’s Thoughts
I love Tom King and have been a fairly staunch supporter of this series so far. However, this issue is clearly weak. As you can tell from my story synopsis, there really is not much to this issue. And unlike issue three, which also focused on character work, this one seems to spread itself a little thin and retread already explored territory. The Batgirl and Harley Quinn confrontation is the only new and really interesting dynamic. The two bond over being victims of the same abuser (Joker) and I do not believe this is something that has been regularly explored before. Their bond and understanding of each other makes sense and is written is a very touching and emotional way. The rest of the comic is well written but not as groundbreaking or new. Nothing really moves forward in the main story here. At issue four we are approaching the halfway point and no clear antagonist has formed. All we have is a vague title of “The Puddler” who has so far done nothing new since issue two. This issue feels like a stop-gap which really isn’t something that is afforded in an “event comic.” Tom King has written an issue that is well done, but not spectacular, and completely skippable.

The art is the bigger issue in this comic. I have spoken highly of Clay Mann in the past, and I still stand by that he is an extremely talented artist. The major issue being how he positions and frames female characters in this comic. Heroes in Crisis is a comic about heroes dealing with their mental health, and it is a concept that needs an artist with a mature and realistic take on these characters. Mann has shown in the past that he can be that artist, but not in this issue. I have no issue with female superheroes being sexy, the problem is when they are sexualized inappropriately. When Batgirl is showing how she was shot by The Joker, the artist focuses on her butt more than the bullet wound, and poses her in a sexualized manner. This takes away from the emotional impact that the page should have portrayed. This again happens when Harley and Batgirl embrace after a very emotional (and well drawn) exchange. The focus of their hug is minimized by a new focus on Harley Quinn’s sexualized pose during this really touching moment. Even Superman speaking with Lois Lane is overly sexualized. Lois Lane is positioned like a porn star rather than someone having a conversation with her husband (and their conversation is dealing with a fairly heavy topic for our heroes). When Booster Gold and Blue Beetle have their moment together they did not bend over to show their rear ends to the reader the same way the female characters do throughout this book. The way women are drawn in this issue is distracting, disrespectful, and undermines the writing. The pages look like well written introduction scenes to softcore pornography.

What Happens When You Break a Test Tube? (X-Men Blue #21 Comic Review)