What Would Batman Do? (Heroes in Crisis #2 Comic Review) 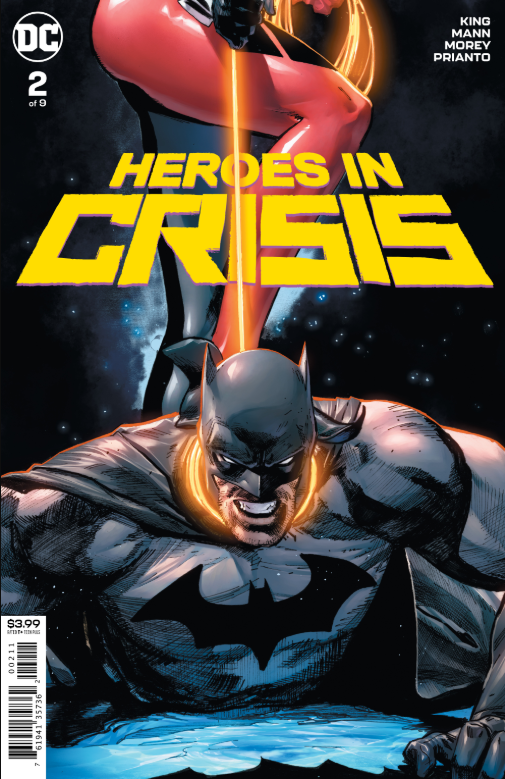 Intro
The plot threads are now clear, and the greater mystery is set. Booster Gold and Harley Quinn have parted ways after their battle. Quinn is assuming she killed Booster. Batman, Superman, and Wonder Woman continue to piece the mystery surrounding the deaths, of those at Santuary, together. This is a comic with many moving parts, but they all are working together to form a cohesive story.

The Story
This is an issue focusing on many different heroes, and how they each handle solving a crime. Booster Gold is confused as to what happened at Sanctuary, and how he is connected with the murders that have taken place. Batman, Superman, and Wonder Woman seem to be “in the dark” the most, and they are working as a team to figure it out. Harley Quinn seems to be the most knowledgeable of what has happened, but she does not make any big revelations (but she does offer some hints). The nine-panel grid scenes, where a hero is talking about their problems, is fully explained and is tied to a greater antagonistic threat. While I won’t spoil the final revelation, needless to say, it will have some serious consequences for the superheroes left standing.

Tim’s Thoughts
After the last jarring issue, this one felt like it was more a whole story. Tom King takes a break from the macabre of the first issue and instead focuses on the questions the readers have. While he provides no answers, this issue does a great job at guiding the story back on track. After the whirlwind of issue one, it was nice to see some focus. Tom King has a great way of really grounding superheroes without having them lose their fantastic elements. The way Batman and Superman play off each other makes me believe they are old friends. There is a thread dealing with the Kryptonite that may/may not be in Batman’s belt that shows King really knows how to handle these characters. Everything just feels “real” on the page, even when dealing with a story that is beyond impossible. Since this issue focuses far more on character interaction, rather than action, Tom King really gets to shine here.

The art here is still very well done. Both Clay Mann and Travis Moore do a fantastic job of not making the art change too abrupt to the reader. However, I feel that some mistakes were still made in the overall output of the art team. While everything is technically sound, choices were made that took me out of the comic. I do appreciate Mann bringing Harley back into her “classic” costume, but not all artistic choices made sense. Mainly Danny Devito’s Penguin showing up like it is 1992 again. This took me immediately out of the comic and made me feel like I was in some lost scene from Batman Returns. Personally, I feel that homages have their place, but not like this. Penguin stuck out like a sore thumb on the page, even though he was well drawn. Other than that issue, the rest of the comic was a dynamic read. The art helped elevate Tom King’s writing in every other aspect.

Summary The stakes have been raised, without killing another character. This issue focuses on the mystery, and it is stronger for it. While I had to recommend the last issue with a big caveat, this is no longer the case. Tom King is known to be able to craft amazing stories, and I feel like this issue signifies he will bring that craft over to “event comics.”

Wake up Batgirl! This Dream Can Kill You!! (Batgirl #23 Comic Review)

When Comics Get Political #29

There is no cure. (Bitter Root #8 Comic Review)