When Comics Get Political
In this column I will dive into times, throughout superhero history, that comics got political. There seems to be a constant debate if political discussion has a place in the medium. I hope to show that politics and superhero comics go together. This time we return to Grant Morrison’s Animal Man and look at how he handles Animal Rights

The Story
The story in this comic is a very simple one, but beautifully told. Animal Man goes to the Faroe Islands to help the “eco-terrorists” stop the dolphin hunt. He teams up with The Dolphin (a rarely used female superhero that has a power-set that is clear from her name) to help save dolphins from a mass slaughter about to occur. Animal Man, Dolphin, and the “eco-terrorists” are able to minimize the damage but not without many casualties. There are many scenes that show the death and destruction of dolphins in on the beach. Furthermore, The story is framed around a Dolphin looking for their family. The story takes a turn for the worse as the dolphin watches its family killed. The main antagonist, and a proud dolphin murderer, finds himself drowning (after being dropped into the middle of the ocean by Animal Man). The dolphin finds the villain and rescues him, creating a really powerful ending to the comic.

This event described in the comic is not at all different from what happens in the Faroe Islands.

The dolphin hunt (and whale hunting) is a real event in The Faroe Islands. As said in the comic, this is a tradition going back for generations. While there was a time that this hunt provided a necessary protein source for the island, it is now done for no real purpose other than the “fun” of killing animals. This comic came out in the late 80s, but the hunt still occurs today. The slaughter and violence shown in the comic is not an exaggeration of the real-life event. If anything it is downplayed. Much like what is shown in the comic, the real event is a tourist attraction in which even children show up to play with the dead animals.

Images of the real world slaughter of pilot whales in the Faroe Islands. As you can see the comic does not pull any punches when showing what happens 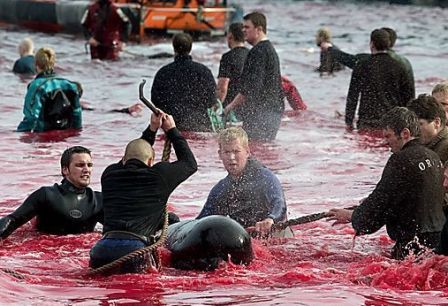 When Grant Morrison took on Animal Man, he turned the character into an animal rights activist in the first arc. His main argument is that a superhero who is connected with animals would fight for their rights since he would be empathetic to their needs. Animal Man became a vegan, under his watch, and started not only fighting super villains but real-world social justice issues. This issue, in particular, was one of the real-world problems Morrison brought to the forefront (along with tackling the Apartheid as discussed in an earlier article). The heroes in this story are proud “eco-terrorists” and it is seen as a noble cause to risk your life and break the law in order to fight against international injustices. The word social justice warrior is thrown around as an insult, but there is no better term to describe how the heroes are acting in this comic. Animal Man is directly telling the reader which injustices are occurring in the world, and how to help fight against these issues.

There is no subtlety when Morrison is dealing with animal rights and environmentalism in this comic.

While politics in American comics tend to focus on American issues, it was interesting seeing another international issue being brought up in the pages of Animal Man. Grant Morrison used his extremely popular and critically acclaimed series to teach the reader what was going on in the world. Sometimes the super villains in the real world are just as evil and nefarious as the ones we see on the comic book page.