When Comics Get Political #5

When Comics Get Political
In this column I will dive into times, throughout superhero history, that comics got political. There seems to be a constant debate if political discussion has a place in the medium. I hope to show, through these articles, that politics and superhero comics belong together. This week The X-Men have an adventure in right-wing extremism.

The X-Men as an allegory
The X-Men are a group of mutants who easily fit into an allegorical role. Society fears them, so it is easy enough to use the X-Men as a storytelling device that gives an empathetic role to those in the margins of society. They have been used, throughout the years, as stand-ins for the civil rights movement, WW2 anti-semitism, and LGBTQ rights struggles. However, it was Chris Claremont who first really pressed this issue to the forefront. It is also easy to say that it is his writing of the team that led to their popularity (even though he did not create the original concept). Without the direct political messages of the X-Men connecting to the readers, and the world around them, it is safe to say they would not be the phenomenon they are today.

Politics as subtle as a freight train
There is a group of comic fandom that has claimed that the current political landscape in comic books is a new thing. Some say that while politics were always part of the narrative, the author’s intent was subtle and non-intrusive. This book came out in 1982 at the height of Reagan’s conservative America, and the critique of those politics are about as subtle as a freight train. Looking at race relations and Christian televangelism are the overt text in this comic. The book starts with the lynching of two innocent mutant children.  The big highlighted neon flashing sign says, “THIS IS ABOUT RACISM!” The artist, Brent Anderson, makes sure to have the two mutant children drawn as black just in case you missed the metaphor. 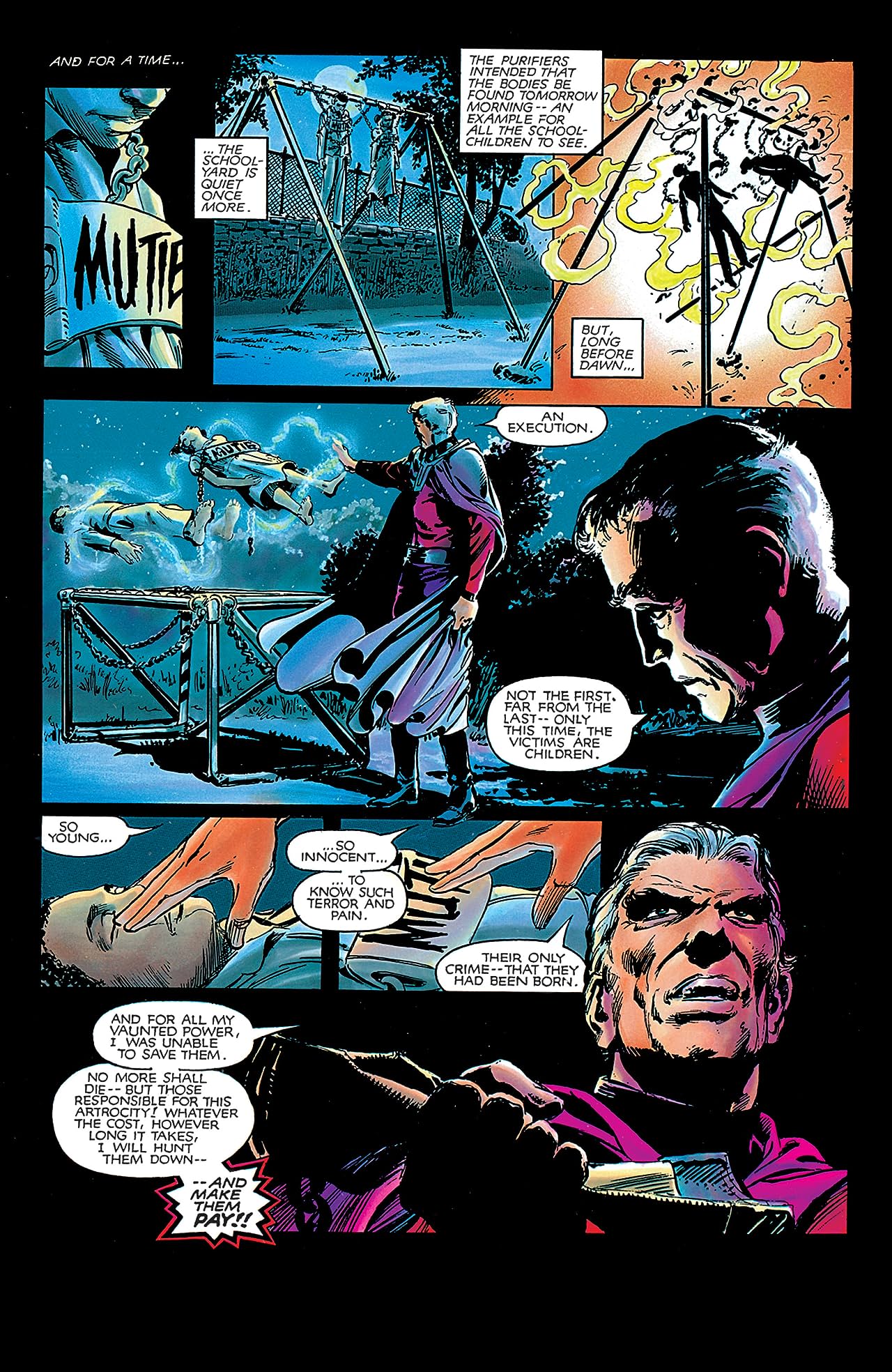 The main antagonist, William Stryker, is a televangelist that uses the Bible and faith to justify using a roving gang of “purifiers” to kill any mutants they see. He uses his faith to dehumanize others and sell fear to the public. He is purposefully modeled after the preachers on TV that gained extreme notoriety in the 80s, some of which are still active today.

Do not take my emphasis on the lack of subtlety in the work to be a negative thing. I actually think the strong overt message makes this a much more important and hard-hitting piece. When dealing with the world around you (and the dangers of racism, hate, and perversion of faith) a soft and subtle touch does no one any good. The reader needs to see these things are evil and why, like the X-Men, we must face these issues head-on.

Faith
One of the more controversial aspects of the book is how it deals with faith. Many readers could look at this piece as a takedown of religion. However, Claremont has made it clear this was never his intent. In the recent printings of the book there is an interesting interview with the author. While I will not parrot the entire message back here I think it is essential we highlight the article’s message on faith. Claremont states that he saw Reagan conservatism use the Christian faith to sell a false message. He even makes it clear that he is a man of faith and wanted to look at how people approach their God from different angles. Nightcrawler, for example, is a devout and faithful member of the X-Men. He is just as much a “man of faith” as William Stryker. Yet Nightcrawler uses his faith as a moral compass to save lives, rather than destroy them.

Claremont says he has everyone in the book acting based on their own set of morals. It can be argued that these faith-based morals come from three sides in the work; The X-Men, Magneto, and William Stryker. The X-Men have a mission to help everyone and provide peace. They are mutants, but they don’t see a division between human and mutant. Cyclops has a really great piece where he says he sees humans and mutants being two branches on the same tree. While there are obvious differences there is no reason not to work together and help each other out. Magneto is more radical and holds that mutants need to look out for themselves first and foremost. His view is justified when he mentions his upbringing in Nazi Germany (not said in this issue, but known to the readers he was a Holocaust survivor). He has seen what dehumanizing an entire portion of the population does, and fears the “humans” will follow the same path the Nazis did. Finally, William Stryker wraps himself in faith and his interpretation of the bible. He sees mutants as an affront to God and supports genocide (which only helps prove Magneto’s original point). In this comic, it is even revealed he killed his own child when he saw the child was a mutant. He feels no remorse for this, as he was only doing God’s work. You can see these three viewpoints, but see which one Claremont is pointing us toward. *HINT* it is the one that our title characters possess.

The comic ends with a human cop protecting a mutant, Kitty Pryde, from being shot. He shoots Stryker and ends the conflict. It is important that it was a human standing up for a mutant, as allies are essential when fighting for civil rights. Magneto tries to convince the X-Men to join his cause and almost gets Professor X to agree. But in the end, they decide to continue to work together for peace and spreading their message of acceptance rather than isolation and segregation.

The Band is Back Together (Fantastic Four #9 Comic Review)

What should we do now? (Justice League #49 comic review)